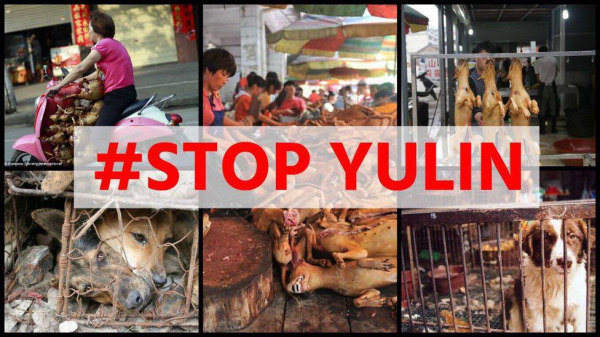 Every year in China during the summer solstice the Yulin dog meat ‘festival’ takes place and lasts ten days, during which it is estimated that 10,000–15,000 dogs are consumed.

Millions of dogs are eaten EVERY YEAR in China but this ‘festival’ is a celebration of this hideous tradition of dog meat consumption which began over 400 years ago.

Throughout the 10 days of ‘festivities’ dogs are paraded in wooden crates and metal cages, many of these dogs are people’s pets that have been stolen! They are still wearing their collars. Can you imagine the fear these poor defenseless dogs must be going through?

One by one each dog is brutally taken out of the metal cage and in full view of the other dogs are then skinned alive, boiled alive causing severe psychological torture before they too are physically abused and murdered to then be cooked for consumption of festival goers and local people.

All due to a misguided belief that increasing the adrenaline through fear in the dogs’ muscles increases their virility when eaten.

This is not a tradition or a so called festival this is a legal inhumane killing spree of man’s best friend!!

Many of the younger generation Chinese do not want this atrocity to carry on, they want it to stop as much as we do. Many people in China tirelessly campaign to end the meat dog trade forever.

Thank you to Beka and her mum for organising the biggest London demo outside the Chinese embassy.

To keep up to date on other UK demos please follow Beka’s Facebook page dedicated to end the meat dog and cat trade.

What action can you take to help end the meat dog trade?

Never underestimate the power of many compassionate and passionate people with an organised demonstration. Make sure you use social media and media if possible to publicise it and make sure you get permission from the police to hold a demo. Try get more well-known public figures involved to spread the message fare and wide.

2: KEEP contacting MPs & MEPS on issue, politely email them telling them of your disgust for the meat dog trade. Just Google search for contact details.

3: Organise local events in towns & cities to get across the message, print up some flyers and give out to the public, many people are unaware the dog meat trade is even happening.

4: We MUST demand that the Chinese government permanently cancel the Yulin Dog Meat Festival and the dog meat trade altogether and establish strict animal welfare laws.

6: Support these trusted charities who are trying to help stop the dog meat trade.

7: Support these trusted charities and individuals working on the ground helping save dogs from the meat dog trade.

– Mrs. Yang who personally goes and buys hundreds of dogs from the meat dog trade.

Consistency is key and we must do all we can year in year out to make the meat dog trade an atrocity of the past.

The K-9 Angels have helped rehome many dogs from the meat dog trade.

Pola (co-founder of K-9 Angels) spotted Felicity and Lady Bee online on Bee’s (rescuer) albums after they were unloaded off one of the trucks intercepted from the meat trade. The truck was smuggling them from Thailand to Vietnam to be slaughtered. Once the truck was intercepted by local police they unloaded the dogs to a large livestock holding area. The government wasn’t funding vaccines or medicine and dogs that were ‘rescued’ from Vietnamese butchers would die one by one from distemper, diseases and fights. There was no structure in place. Both Felicity and Lady Bee were puppies so when Pola saw them she asked Bee (rescuer) to move them. They went to Bangkok to foster and later Tracy and Nigel were interested in Felicity. Later they found out Felicity and Lady Bee were best friends and decided to adopt both of them. Both girls now have the most amazing life in the UK!

The Yulin dog meat festival has just passed, and now Korea is gearing up for Sambok/Boknal which means “three dog meat eating days.” This slaughter is another “tradition” that concocts an excuse to eat dog and cat meat. The Boknal festival is BIGGER than the Yulin festival, with some estimates suggesting more than a million dogs will be brutally killed and eaten.

Please join the K-9 Angels with animal loving celebrities and speakers, Miracle survivor of the meat dog trade and the 2 beautiful K-9 Angels meat dog survivors Sophie and Peggi along with their adopter.

Full details on the poster below, and here’s a link to the event page on Facebook. Please let us know if you can attend.